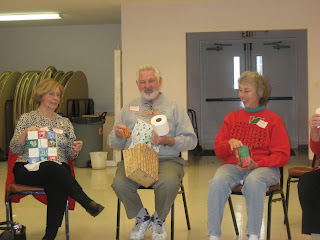 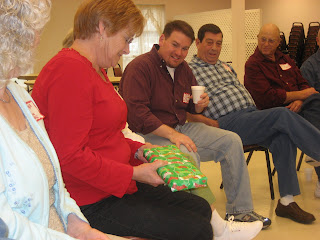 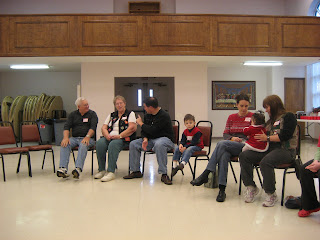 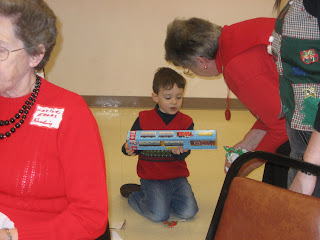 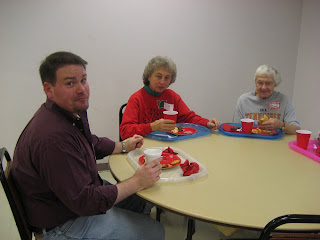 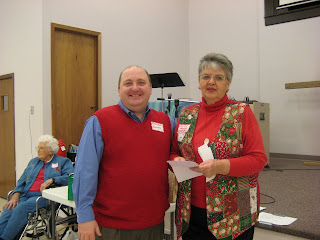 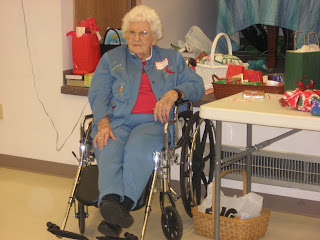 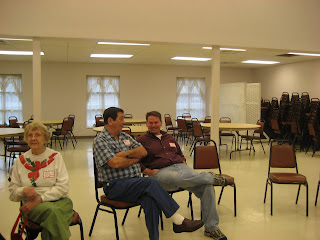 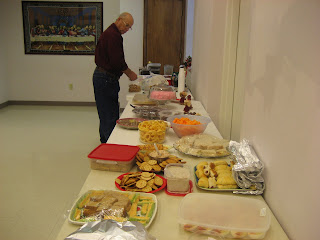 Hey, Y'all,
Well, here it is Saturday, and I am just now getting to posting about our Senior Citizens "Unique Antiques" Christmas Party at our church on Thursday.
We had a really great time! We had lots of food (a priority, you know) to nibble on after we sat around and chatted with one another in a circle of chairs, waiting for everyone to arrive.
After we ate, we once again sat in the circle and began the fun and games. Our director, Judy, had planned well. The first thing we did was to write on a piece of paper 3 things we liked to do. The papers were then folded up and taken up. Judy then went around and one by one, each of us chose and read out loud what was on the paper. The group members then tried to guess who had written it. When it was correctly guessed, another person chose one to read.
Judy then started a gift around. It had several individual layers of wrapping paper on it. She played music as we passed it around, and then when the music stopped, the person holding the gift would take one layer of the paper off of the gift. Then it would be passed again in the opposite direction until the music stopped, etc. The person taking off the last layer of the gift wrapping would get to keep the gift.
Then she passed paper and pencils around and on the paper was written the words Merry Christmas. The letters were vertically written on the paper with a line after each letter. We were given 90 seconds to write as many words as we could beginning with each of the letters in Merry Christmas. I came up with 40 words as did some of the others. I think 41 was the top number of words.
Judy then started a santa's stocking with small objects inside it. We were each given 30 seconds to reach in and feel, to determine what the objects were. After 30 seconds we had to pass it on to the next person to feel inside it, while we wrote on the paper what we thought was inside the stocking. That was great fun, too. The objects inside were: plastic spoon and fork, bell, police car, beads, marble, (can't remember the rest of them).
The next thing we did, she asked for 4 volunteers to come up in front and so I volunteered along with her mom, Marion, who was my partner in the task. Another couple also volunteered. The task was: as a team, using only our left hands, to wrap a gift and be the first pair to completely wrap it. The two teams basically tied. We were given a piece of wrapping paper already cut to proper size, a box to wrap, and tape to use. We had to hold our right hand behind our backs so we could only use the left one. We had the use of a table to do the wrapping. It was a lot of fun.
The last game we had was when we got to receive a gift. We had each brought a wrapped gift with no names on them. The gifts were passed out and we listened to a story read by Judy as as we listened, the story concerned the "Right" family. Each time we heard the word "right" we passed our gift to the right, then when we heard the word "left", gifts were passed to the left. After the story was over, whatever gift we had in our hands was ours. Some of the gifts were gag gifts, others not. Mine was a pair of tall Christmas mugs. I joked with the pastor and said, "Wow! These will come in handy for drinking my brewski's...uh, I mean my hot cocoa." He laughed and said, "I know you were joking, Miss Ruby."
Pictures above:
1. Ralph opens a roll of toilet tissue while wife, Melita, and friend, Wanda, look on.
2. Fay is unwrapping a layer of paper while others watch.
3. Linda, Pastor's wife, holds Julie's baby.
4. Youth Minister's son, Luke holding train set.
5. Music Minister, David, eating with Wanda and Louise.
6. Pastor and Judy
7. Marion
8. Nell, Lester, David
9. Ellis making coffee for lunch
Well, there were other pictures, but I suppose this is enough for now. We are going to be heading in to Knoxville in a little while for our family Christmas get together. More tomorrow. Pictures at 11:00. (little news joke there).
This is Blabbin' Grammy signing off for today. Thinking of my brother's family in Phoenix right now. Love to each of them and best wishes as well. Have a lovely day tomorrow, all of you faithful readers of my blog. Bye for now.
Posted by Grammy at 8:54 AM

It sounds like you all just had a wonderful time celebrating. I loved hearing about all the games and things you did. Judy is very creative! Hope you are enjoying your weekend. I am still baking!