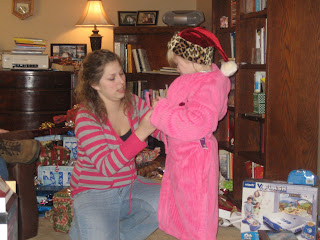 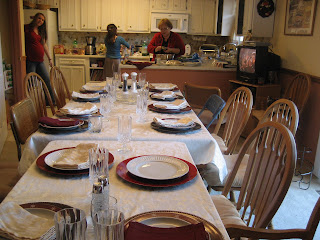 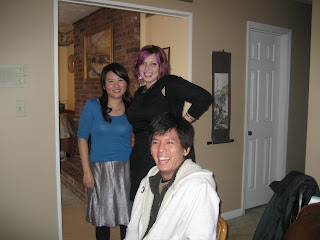 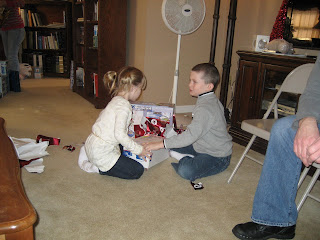 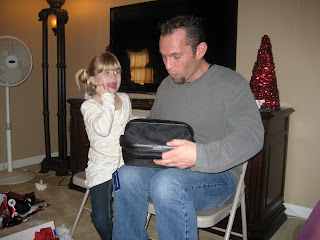 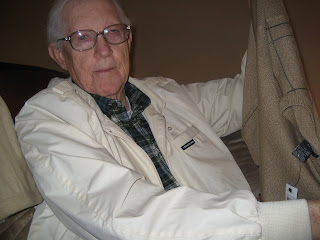 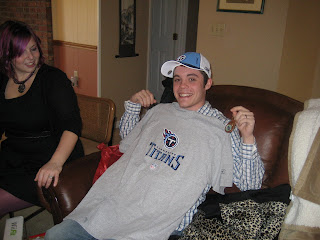 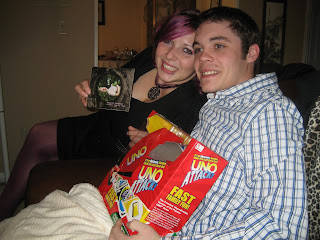 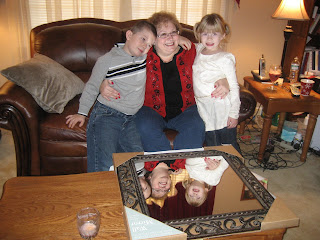 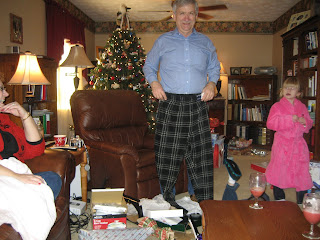 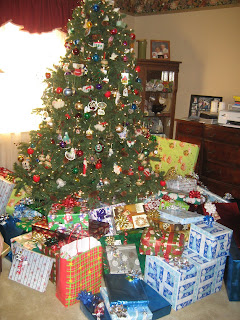 
I hope you had a really great Christmas this year. Ours was a lot of fun with friends and "family". The family we spent the day with yesterday is so dear to us, we consider them a part of our family.
I spent about an hour online chatting with our daughter, Teresa, who didn't get to go visit grandchildren, and I was so sorry to hear that she and Tom couldn't go see them. We did enjoy the time we got to spend chatting. (As we always do).
We left here Christmas Day about 11: 15 a.m. and headed over to Mark and Allie's, who live only about 5 or 6 minutes away.
There were a lot of people at Mark and Allie's. Besides Mark, Allie, Gramps and me, there were their three daughters, Sarah (who lives in California) and her fiance, Josh; Jessie and her friend, Travis; Rachael and her fiance, Jason; Jason's two children, Connor, and Cassidy; and our honorary grandchildren from Taiwan, Jennifer and Nelson.
You can see from the pile of gifts under the tree that there were a lot of them. We began opening gifts at noon, and of course, only one gift was opened at a time. If you can believe it, at 2:30 in the afternoon, we were still not quite through opening gifts. The paper, ribbons, bows and boxes literally flew as gifts were opened.
We finally had dinner/supper at 4 p.m. It was quite a spread, and Allie did herself proud. We had baked ham, roast turkey, green beans, niblet corn, stuffing, hot rolls, ham gravy, and turkey gravy, deviled eggs, sparkling cider, mashed potatoes, and other foods I just can't remember. That doesn't include the desserts which came about two hours after the dinner.
My sister-in-law, Mae, had called me earlier in the day and was telling me about the disaster that had come her way. She had intended her children and grandchildren and great grandchildren to come to her home for Christmas dinner. Mae is 89 and had prepared the turkey to go into the oven (on Wednesday) and also had made casseroles to cook in the oven. She had her table set with plates, silverware, candles, the whole deal. She turned on her oven to bake the oven, and the casseroles. No heat in the oven. It had done its last do. She was frantic...what to do? She called her son, Fred, and he came and got the food and was going to bring it back on Christmas. I haven't talked to her yet to find out how it all turned out. I will, and will relate the rest of the story when I do my next posting. Mae is a sweetie, and we all love her.
I also got to speak to our daughter, Carol, and wished each other a Merry Christmas.
Pictures:
1. Rachael helps Cassidy with new robe.
2. Dinner table before we all fell to with both hands
3. Jennifer, Sarah, and Nelson
4. Cassidy and Connor open first gift of the day
5. Travis opens a gift
6. Gramps with new sweater
7 Josh, Yay, a Titan's fan
8. Sarah and Josh with gifts
9. Allie with new grandchildren to be, Connor and Cassidy
10. Mark with new PJ's, Cassidy in her new robe
11. Tree with pile of presents before the onslaught began

No pictures of me, because I was having fun taking pictures.

Well, that is it for today. This is Blabbin' Grammy signing off for now. Hope you all had as much enjoyment from yesterday as we did. Love to you all.

More to come in the way of picture from our get together at Hugh's on last Saturday. Goodbye for now.

Sounds like you had a wonderful Christmas and enjoyed spending time with family and friends. I am so glad your husband is better and was able to enjoy the holidays.

Looks like fun to me. My Christmas was "different." It didn't even seem like Christmas. I missed getting up at 5:00 AM and watching the grandboys open presents and wading through papers up to your waist. They are on their way home from LA today. I can't wait. I liked your pictures.