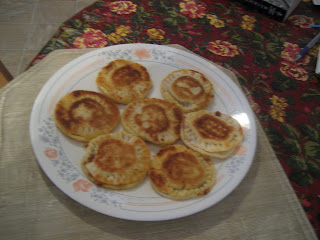 Hey, Y'all,
Merry Christmas to all of youse guys and gals,
This is, of course, Christmas Eve, and I was up at 8 a.m. today, because I slept in and my back was in pain. When I got up, I immediately smeared some Bio-freeze on my back and it helped some.

I haven't posted for a few days and realized I needed to do so. I have been a little busy with stuff and going and doing. A couple of days it was just too cold to get out, so I utililized that time working on Matt's quilt (which I had hoped to get to him for Christmas, but had to send him a promissory note instead). I also cooked some dried apples yesterday, in preparation for making some fried apple pies.

I sweetened the apples with splenda so that Gramps, Mark, and Allie could eat them without worrying about sugar. This morning, I got up and decided it was time to make them. You will notice from the picture how small they are. I purchased some of the ready made crusts that come rolled up and rolled the crust a little thinner (I used aluminum foil to roll them on). With the use of aluminum foil, you don't have to use flour to roll them. I then used my largest biscuit cutter to cut the circles, put about a teaspoon of apple filling into the center of the circle. (I always add cinnamon and cloves to the filling when hot, after draining water out of cooked apples).

After putting the filling on the center of the cutout crust, I put another circle of dough on top, and then using my index finger, I carefully crimped the edges of the crusts together. Then, using a salad fork (shorter tines, you know), I pressed the edges with it all the way around, then pricked the center in a couple of places to allow steam to escape from inside, and put them into a skillet with some butter-flavored crisco already in it, and melted. The skillet should be hot when the pies are put in and they only need a couple of minutes before turning them over. Cook till golden brown, remove, and eat as you wish.
Yesterday, I went into Knoxville to take Imazo anywhere she needed to go. I really enjoyed sitting with them and chatting for awhile. We reminisced about my dad and the way he liked chocolate covered cherries and chocolate drops. For those of you who do not know about chocolate drops, they look like a large chocolate kiss, (kind of, only rounded on top) and the center is made of a smooth creamy confection. People would bring some of each to him at Christmas, and he considered them his, so he would take them to his bedroom and hide them in a drawer, then later, would disappear for a few minutes. Then he would come back into the living room (or kitchen) kind of grinning. We knew without any guessing that he had been back there sneaking a chocolate drop. Ha. It is so much fun to remember things like that.
Imazo and I went out for some errands and when we got back I had to leave. I had gotten Gramps up around 11 a.m. and he had his breakfast and was able to be alone for awhile.
A grocery store was on my route home, so I stopped and got a few items, then proceeded on home. I was very pleased to see that Gramps had changed into his day clothes. We spent the rest of the day with the television on and after we had supper, we sat in the living room and I worked on Matt's quilt.
Today, after while, I will finish the fried pie making, and doing the kind of things that will have to be done before tomorrow. I just finished talking to my cousin, Mary, who lives in Knoxville. She is the daughter of my Uncle Arthur, and is in her 80's. It was wonderful talking to her and her husband, Fred.
Well, Gramps is up, so it is time for me to close this little episode. Love to all of you, and I wish all of you to have a wonderful day tomorrow with friends and family.
This is Blabbin' Grammy signing off for today. Bye for now. More later.
Posted by Grammy at 8:09 AM

Mmmmm...fried pies!
Hey, sis. Now we know where I got my love for Chocolate Drops!! :-)

Chocolate Drops and Fried Pies,,,,,,that makes a good Christmas for me...of course anything chocolate makes anything better. I wish everyone a Merry Christmas and a Wonderfull New
Year.
Darlene

The apple pies look yummy! You have been a busy woman. Hope your Christmas is Merry and Bright.

yeah...and chocolate covered Cherries. Funny. I'm not crazy about either of them but Tom loves them. Can you still find chocolate drops?

Merry Christmas, I hope you guys all had lots of fun. I can't wait to see you in a couple of weeks.