I Did My Christmas Craft 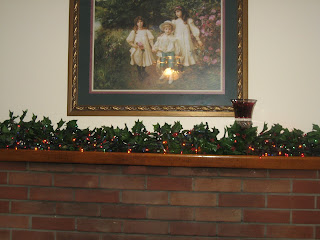 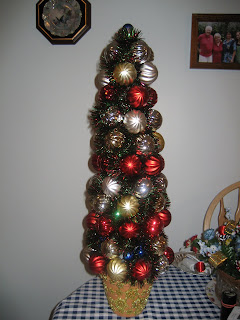 Did your cell phone ever wake you up in the morning? Mine did, about 6:30 this morning. It was in my purse, in the kitchen, where I place it when I come in thru the back door. I awakened to the sound of the music and couldn't figure out where the music was coming from. Finally, when I had it figured out, and jumped out of bed, (yes, I can still get up quickly when it is called for), and ran to get it, it stopped playing its little tune.
I listened to the message, and it was some person calling apparently someone they thought was a credit card company or a business. Anyway, I decided they didn't want me. I decided to just stay up and proceeded to begin my day. I threw on my housecoat, and would you believe, I am still in my housecoat. I decided that I would go out and bring in my purchases from yesterday from the car. I was just too tired yesterday afternoon to bring them in.
After taking my anti-reflux medication so I could eat breakfast in an hour, I went out and brought in the purchases. It took several trips. Then, I decided that I would do the craft project. I gathered my materials: glue gun, glue sticks, a styrofoam cone, 3 packages of shatterproof tree ornaments (balls), a 50 foot length of garland, a clay pot, and rocks to fill the clay pot so it would make it heavy and a solid base.
I used my glue gun to glue the ornaments onto the styrofoam cone. After I had them on, I wrapped the garland around between them to fill in the white empty spaces. Also, before I glued the ornaments on, I removed the little caps that you attach hooks to, to hang them on trees. I stuck the balls into the styrofoam using the point of the ball, removed the ball, filled the hole in the styrofoam with glue, then put the ball back into the glue. I held the ball in the glue for a minute and wa-la, it was attached.
When I had finished decorating the styrofoam cone, I filled the clay pot with rocks from my driveway, and then glued the base of the cone into the top of the clay pot.
I had some gold plastic garland made of stars or snowflakes design. I put them around on the clay pot to decorate it. The result is at the top of this posting.
While doing my craft, I worked on it at the kitchen table. You would not want to see what the table and the area around it looked like. I always make a terrible mess when I am doing a craft. I never worry about the mess and then I just clean it up after I am through with it all.
Also, I took a picture of the Christmas lights on my mantel. I haven't done a lot of decorating this year. I have been alone a great deal of the day, because Gramps has been in bed until about 3:30 this afternoon. His choice, not mine. So, I had breakfast alone, as usual, and then lunch alone. No supper yet, and I may not do supper. I'm having sugar free ice cream bar right now at nearly 7 p.m.
I bought a hoop yesterday to work on the quilt I am making for Matthew. I realized it would be easier to handle the quilt area that I am stitching if it is in a hoop. I started using the hoop today, and it does make it easier to have the area exposed that way, but it is harder on my fingers, I think. However, that doesn't matter. I timed myself today working on one square, going around the flower, and it takes about three hours to do one square. So, I have 33 more squares to do, so that comes out at 99 hours yet. Hmmm. I am really going to have to speed it up a little if I expect to get it done in time for Christmas.
Either that, or stop watching television while I work on it. Ha.

It is Thursday morning right now, because I couldn't get my pictures to upload before going to bed. I guess the pathways were overcrowded last night for the internet. Off to a brand new day, and I hope each of you, my readers, have a wonderful day. I know I won't be going out today. The weather prospects are not too good, and I don't need any groceries. We are due to have more rain today, and it is supposed to turn into wet snow this afternoon or evening. This is a good day to stay in, I imagine.

This is Blabbin' Grammy signing off for today. Love to you all. Bye for now.

Well done on a splendid job. a pleasure to read and photo's great. take care.

Hi,
Thanks to both of you!
I appreciate all comments.

The tree is lovely. You did a great job. Your mantle looks pretty too!