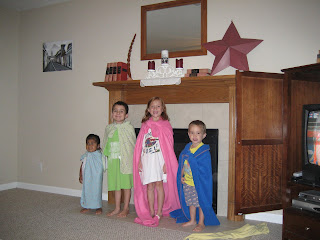 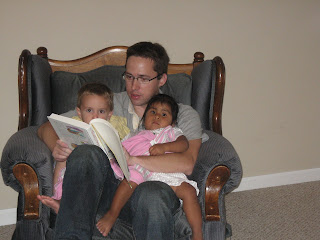 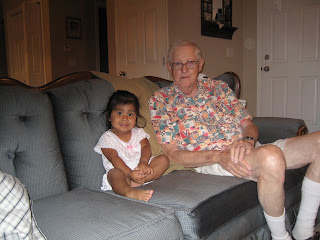 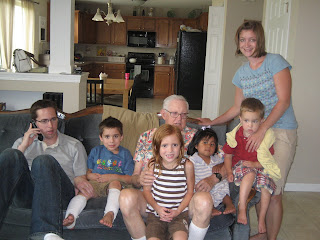 Hey, Y'all,
We arrived back in Knoxville today around 10:00 a.m. This morning at 5 a.m., I awoke to hear Gramps taking a shower in the motel bathroom. About 10 minutes later, I hear a clattering from the bathroom. Many times, I have cautioned him to not hold on to shower rods when getting out of a shower to give him balance. Well, this time, it happened. Yep, he pulled down the shower rod; it came out of the wall.
After he had finished his shower, and had gotten dressed, I had to take a "spit bath" using the basin and then we packed everything ready to go, carried it out to the car, and then went down to the lobby for the free breakfast (free in the sense that we didn't have to pay any extra for it). It was pretty good, but not a Cracker Barrel competition, you understand.
When I handed the room key in at the front desk, I told the desk clerk about the shower rod falling, and he said, "oh, my, did your husband get hurt?" and I said, "No, thank goodness, it missed him by a hair." Of course, he laughed and said, "good."
We left about 7 a.m. for Knoxville, in the midst of sprinkles of rain, which grew to a downpour as we progressed south. Not only was the rain difficult to drive in, my eyes wanted to close, because of my early hour of wakening, and the drumming of the rain on the car roof. After a while, I had overcome the desire to sleep, and was able to fully concentrate on traffic and driving. Thank you, Jesus!
I am posting some pictures that I took while in Illinois, of my family up there (Daniel, our grandson; his wife, Whitney; their four children: Hannah 7, Austin 5, Noah 3, and Ellie 2.) I am not in any of the pictures because I am the one behind the camera, you see.
One of the pictures is of the family group plus Gramps (minus me). Another one is of Daniel reading a Bible story to the two youngest, which he does every evening and then reads one to the older children. (When he is at a meeting, Whitney does the reading and quiet time with them, if he cannot be in time for their bedtime). Daniel and Whitney have instituted a quiet time when they read the Bible and pray, thus continuing a custom initiated by his parents when they got married nearly 33 years ago. Another of the pictures is of the four children dressed up playing. They love to dress in costumes. Another picture is of Gramps with little Ellie, the youngest, and recently adopted from Guatemala.
After we got back to Knoxville, we visited with Hugh, Imazo and Mae, and then went to (yes) the Cracker Barrel for lunch. We then left and drove home and promptly went in and took a nap. (Gramps is still napping - two hours was enough for me). I got up and unloaded the car, went out on the porch and ate a sugar free ice cream bar and watched the hummers for a while.
I came back in and unpacked the dirty clothes and put them in the washing machine and they are probably ready to put into the dryer right now, but can wait. Now, I am in here in my work/computer/craft room at my computer and listening to the news on television. It seems that the rain is going to continue for a while yet. We had been without rain in our area for the past 3 to 4 weeks. Walking on the grass in the yard had been like walking on crunchy straw. Thank you, Lord, for the rain!
Well, that is all for right now. Tomorrow, we get back into the "swim of things" and begin doctor's appointments. Sometimes I say, if it weren't for dr. appointments, we would have nowhere to go. ha ha. It seems the older we get, the better acquainted with doctors we become.
Thought for the day: If you have been delaying calling a friend or sending them a card, do it now, tomorrow may be too late.
Signing off for the evening, this is Blabbin' Grammy, hoping you get a good night's rest and have the peace of knowing The Master in your heart.
Posted by Grammy at 3:05 PM

I'm glad you are back home safe and sound. Sounds like you had a wonderful time with the family. I love the pictures. I wish more families could be like yours! May you have a good night's rest! Clara

This is Daryl, not Mom B. Actually, the daily devotional tradition started about 47 years ago, when I was but a lad, a sprig growing up in Tennessee, and just added Carol and each of the kids to it as they joined they family. It rejoices my heart to see it contain with each of our four children. It is God's word that God uses to transform lives into His image, and there is no shortcut around spending time there. It has been a rock for our family, and without doubt the highlight of my every day is the time spent in His word. Glad you had a nice trip. - Daryl