Movie Party with the Grandkids

Hey, Y'all,
Saturday morning and I have much to be thankful for...had a good night's sleep in my bed and woke up feeling pretty good for an older lady. Did not cough during the night (that I know of) and did not take a cough suppressant at all yesterday. Sometimes, I think that all the cough medicines and suppressants just make a cold linger longer than it would normally. We take a cough medicine to make us cough, a suppressant to make it stop for awhile, and a combination to confuse the cough so that it doesn't know whether to be active or inactive. Who knows what to take any more. Oh, for the good old days when you just mixed a little "bottled-in-bond" and some salt and took a spoonful at time to cut the phlegm and help get rid of the cough. That is what we did for coughs back in the old days when I was a kid. (In case you younger whipper-snappers don't know what that is - it is whiskey and salt.)  Whew! It really worked.

When I was only six weeks old, I had the whooping cough, and would have died, had it not been for a drop of that at a time to keep me breathing. Mom has told me that story many times. She was a firm believer in its restorative powers. She was also a firm believer in not drinking the stuff, too. My dad's father and brothers were all afflicted with a love for the alcohol, and she told my dad before they got married that he was not to be drinking ever, or they would not be getting married. Needless to say, he didn't touch the stuff and they had six kids, and celebrated over fifty years of marriage.

Well, enough about that...for a long time, Ben and Emily and Matt and Amy have been planning to come and spend an evening with me to have supper and watch my favorite movie, "No Time for Sergeants" with me. Last evening was the time and we had a wonderful time.

They took a chance that they would not get my cold again. You see, when we all had the get-together at Andrew's for Mother's Day and Julia's and my birthdays in May, I had a cold. Granddaughter Emily caught the cold, and gave it to Ben. Then Amy got it and gave it to Matthew, and last Saturday they came over and helped deliver the recliner to my house. Matthew and Amy also mowed the yard and helped me clean some air vents. Of course, Matthew was still fighting the cold, and I hugged him of course. Well, two days later I was sneezing, and then coughing....and I had it back again. Ha ha ha.

Anyway, you get the idea...the cold that lives on forever...Say, that would make a good movie title, wouldn't it? Last night, we  had salad, Domino's Pizza, freshly  baked chocolate chip cookies, soft drinks, popcorn and a good time. It was wonderful having them over...kind of kids that make grandparents proud...Dubby would have loved it. Being able to do things like this makes the move to Texas well worth all the difficulties.. 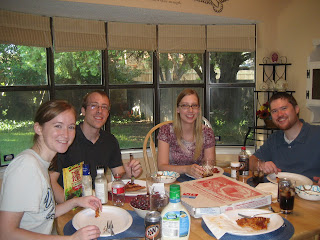 Left to right: Emily, Ben, Amy and Matthew
Well, folks, that is about it for today. This is Blabbin' Grammy signing off for today. Much love to each of you, my friends and family. More later. Bye for now.
Posted by Grammy at 7:53 AM

Glad the grandkids came over for movie night. Hope you guys stop spreading that cold though!

Sounds like a perfect evening. That's one of my favorite movies, too, though I haven't seen it in many years. My favorite scene is when the sarge comes in to inspect the latrine, and Andy Griffith has the toilets rigged so they raise their lids in a "salute"!

How I envy you Ruby (Not for having the cold) but seeing your grandchildren, I see only one of my four at the moment due to my son not being very nice, but give him time and all will be well.

Take care and have a good week-end.
Yvonne.

What a wonderful and blessed evening you all had. I had a friend over for movie night with Benjamin and I last night as well.

So pleased that your grandkids are closer now and you are able to enjoy them more often.

God's blessings to you Ruby!
Trudy

uh-oh...i see another family movie nite pattern emerging...glad u have the kids nearby to entertain!

You sure brought back some memories for me with this post, Ruby, only my grandmother and mom used whiskey and honey as the cough medicine of choice. Sounds a lot better (and I think it worked a lot better) than that bottled junk they have on the drugstore shelves these days.