"Are You Blabbin' Grammy?"

Hey, Y'all,
On Monday of last week, I had supper with the senior group from my church here in Bedford, and one of the couples mentioned to me that their daughter was returning to the Knoxville area on the same day as I, but a later flight. So, on Wednesday I was sitting in the DFW airport waiting for my flight to be called, and I was reading a book. I had on the little hat I wear in my blog. A young woman came up to me in the airport where I sat and asked "Are you Blabbin' Grammy?" Ha. It was the daughter that the couple was telling me about. She told me her parents read my blog. She and her husband have a restaurant in Pigeon Forge called "Fried Catfish", so if you are ever there, tell her you know Blabbin' Grammy. I am posting some pictures today from my visit to the Knoxville/New Market area.


Some places that I went did not get pictures taken, and for that I am regretful, but nothing can be done to remedy that error. I did not get to go to the cemetery where Dubby's remains are interred because it was so cool and rainy. In fact it was that way most of the time I was there. Guess what it is doing here today??? Yep, rainy..it had been sunny till yesterday evening. Ha. 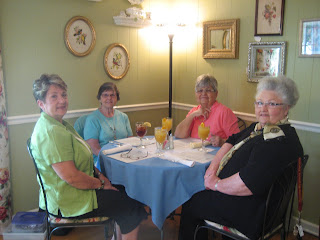 Left to right: Carolyn, Phyllis, Me, Ginger (At Abner's Attic having lunch with some of my teacher friends) 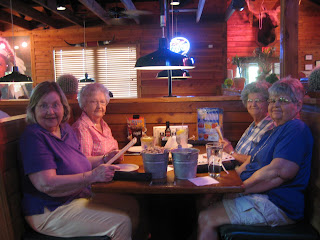 Supper with family (Niece Norma, Her mom Mae, Imazo, and Me) Mae and Imazo are my sisters-in-law) 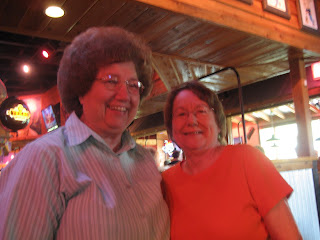 My friends from New Market, Ruby and Rita (there is a story here)

Mae, Norma, Imazo and I were having supper at the Texas Roadhouse in East Knoxville and I was facing Rita in the picture just above. She waved at me and asked do you remember me? Well, of course, her face was so familiar, but out of place (you know how it is when you know someone but see them in a different place from where you know them); so they came over and told me. Of course, then I remembered. Our church at New Market does the Appalachian Outreach every summer, where we feed missionaries who come in from other churches out of state and work with Carson Newman Appalachian Outreach to repair homes of economically deprived persons who live in the area. The churches in our area choose a week and feed the missionary groups. Our week this year is in June, and of course other churches that participate choose their own week, and have other groups that come in during their week. Anyway, to get to the point (finally) Ruby and Rita have helped in several years at our church. Ruby also went to school with my brother, John, I think.

Well, I have a lot to do today, so I had better stop for now. More pictures later. This is Blabbin' Grammy signing off for now. Bye for now. More later.

How great to get reconised, I enjoyed the account of your stay and loved the pictures.

g'morning to you Ruby...love getting to "meet" all your folks/friends up that way!!! Have a wonderful day. :)

That's wild someone recognized you! Glad you had a nice trip, rain and all.

HA! Didn't know you were famous, huh? Sounds like you had a wonderful trip. Who cares if it rained? You got to spend time with family and friends.

Now see there?...You are a famous blogger now~!! Good for you...glad that they recognized you..How fun your trip sounds connecting with family and friends...Good to read your blog again...Cheers!!

Hey, Y'all,
I have been doing laundry today, going through mail, paying bills, and sitting around in my gown tail, watching it rain, hearing it thunder, hearing the hail hit the windows. Just generally enjoying being at home again. Thanks for the welcome home!
Love, Ruby

Hey, miss seeing you! Looking forward to a visit Sunday! Remember to bring your yummy, soft, chewy brownies! :-) There should be 12 of us, counting the girls and Audra.

You and your lil hat are famous! I will have to remember the gal from 'Fried Catfish' the next time we visit our old friends in TN. Glad you had a good time!